NOTE:  Fiesta Fridays is a special series to highlight the many memories I have of Fiesta through the photographs I’ve taken since 2003. 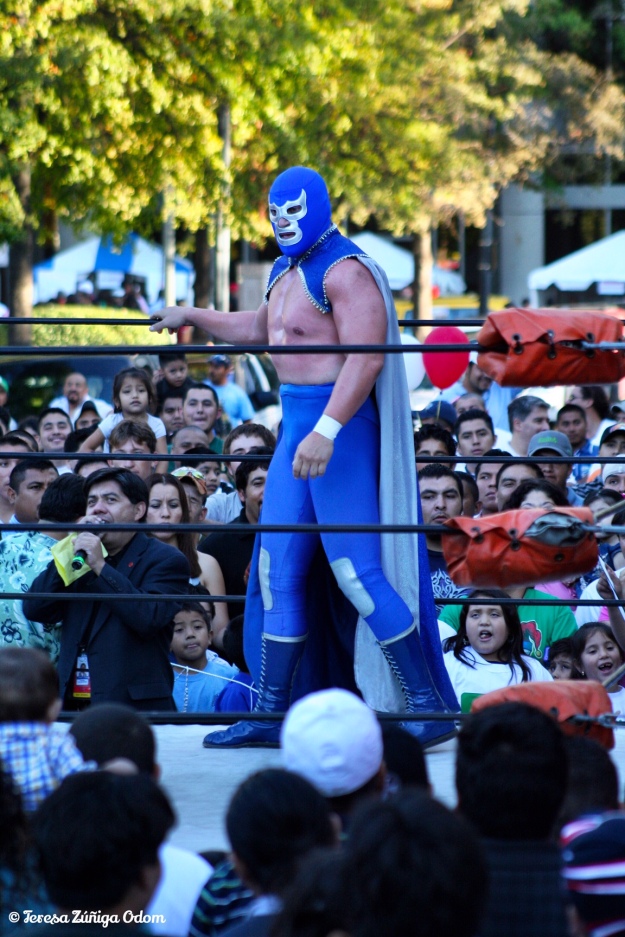 The Blue Demon Luchador makes his first appearance at Fiesta in 2007!

Fiesta 2007 brought several new additions to the event.  It was our 5th anniversary so everyone involved was so excited that we had made it this far!  It also turned out to be one of our biggest years ever with over 20K people attending!  I was board president that year and the board members and volunteers seemed to be settling into a great rhythm with the planning and engaging both the English and Spanish-speaking communities.  This was also the year we went out on a “so-called” limb and decided the time was right for wrestling!!!

Our presenting sponsor – Coca Cola – had just launched a new energy drink called Full Throttle Blue Demon and had acquired Mexican luchador (wrestler) Blue Demon, Jr. to help with promotions in Mexico. The board was having a meeting several months before our 2007 Fiesta event when we started discussing new aspects of our event.   Lucha Libre was mentioned and board member, Mike Suco (with Coca Cola) brought up Blue Demon.  Things took off quickly from there and before you knew it, we had Blue Demon making a weekend appearance in Alabama and we had also partnered with Wrestle Birmingham to bring a ring and local wrestlers to Fiesta!  The ring was set up right next to the Coca Cola Main Stage and the crowd that gathered was incredible!  I remember standing on the main stage and getting some pretty awesome photos of the wrestling matches!  The crowd that gathered that year was incredible!

The Blue Demon and Wrestle Birmingham 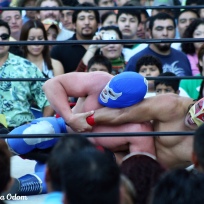 The Blue Demon and Wrestle Birmingham

Mike Suco, of Coca Cola Bottling and Fiesta Board Member escorts Blue Demon around Fiesta in 2007

Blue Demon made a return appearance in 2008 to huge crowds.  He was definitely popular!  The current Fiesta board is looking at bringing wrestling or Lucha Libre, back to Fiesta for our 15th anniversary celebration.  Fingers crossed it works out!  I would love to see all that excitement once again at our event! 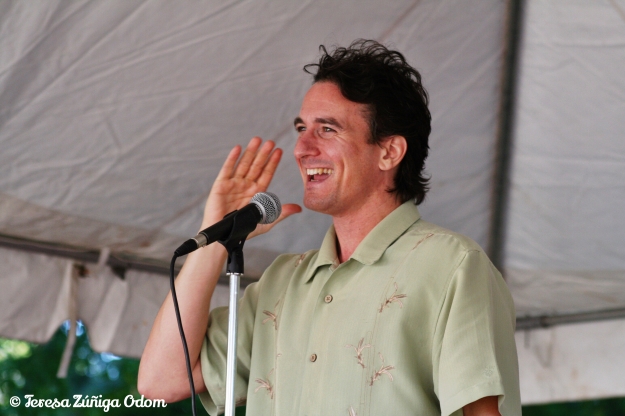 Antonio Sacre, storyteller, performer and author, makes his first appearance at Fiesta in 2007 in the Storytelling Village.

Fiesta also created a new village in 2007 – the Storytelling Village.  We were lucky enough to find Antonio Sacre, a storyteller, performer and author of Irish-Cuban descent to highlight the village.  And let me tell you, he not only highlighted the Storytelling Village…he ended up highlighting the entire festival!!!  He didn’t just stay in one part of Linn Park that day!  He was all over the place, finding opportunities to tell stories in the cultural village, on the main stage and just lend his all around good nature and great stories to the delight of the many guests that day at Fiesta!  No group was too small or too large for Antonio!

The Storytelling Village itself was such a great set up…we had beanbag chairs for kids to relax in and hear stories read to them by UAB college students.  The Birmingham Public Library also partnered with us to make this village come alive.  Bilingual books were donated so kids got to read, hear the books read, and then go home with one to enjoy!  Families flocked to the new village that year and seemed to really enjoy the peace and quiet offered there…away from the activity of the other areas of Fiesta but close enough to still see what was going on. 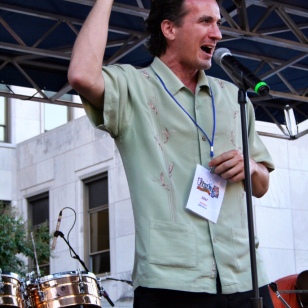 Photo opp with Antonio in the Storytelling Village

Antonio performs in the Storytelling Village

Antonio Sacre made a return visit to Fiesta in 2008 and this time he came for the entire weekend.  We arranged for him to visit several schools on Friday and he became quite the ambassador for Fiesta that year!  I know we saw an increase in family attendance from the schools visited.  I was fortunate enough to chauffeur him around that day.  And on Friday night we had a reception at the Birmingham Public Library where we heard from Antonio,  had a book signing and we also hosted several Fiesta scholarship winners.  Our local CBS news affiliate even came out to cover the event!

Welcome banner at Central Park School! The kids had all read Antonio’s book – The Barking Mouse! 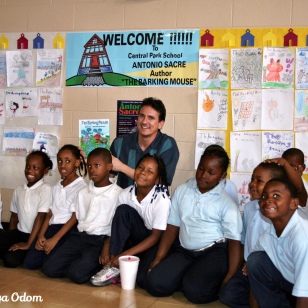 Antonio poses with some of the kids at Central Park School

Book signing at Birmingham Public Library. Antonio poses with my friend Lisa Rios and her daughter

I have one more great memory of Antonio and the 2008 year and it is unrelated to the Fiesta event…  There was a Leonardo DaVinci exhibit at the Birmingham Museum of Art that fall.  The BMA had been a partner with Fiesta for many years so I had some tickets to the exhibit.  We had some time before the first school visit and I asked Antonio if he wanted to go.  He said “sure!”  It turned out to be such a fun few hours walking around the museum with him and listening to his thoughts on the DaVinci’s drawings and other artifacts.  It was such a treat for me to hear Antonio’s impressions through an artists’ mind.

More to come so please come back every Friday through September 30, 2017 for more behind the scenes stories of Fiesta!

My 20th Annual Cookie Swap was last night and this years theme was based on the TV show Friends! “The One With the Cookies!”🍪 I’ve gone through quite a few party themes in 20 years and I don’t know exactly what made me think of Friends this time but it was a hit and I’m thinking about leaving the Central Perk backdrop up through Christmas because it kind of adds something to my living room. 😂 Meanwhile, it was so great to have my party this year to kick off the holidays. I woke up this morning in quite the Christmas mood!
Yesterday we got to shower my niece TJ and her husband Matt with a baby shower! Baby boy Whitworth is due in February 2022 and we couldn’t be happier…our family is experiencing quite a baby boom and I’m so excited that there will be so many “Odom” cousins growing up together just like TJ, her sister Kate and my own children grew up together and shared so many experiences. 💙 In fact, yesterday we talked about planning a photo shoot with all the babies next Christmas and I’m envisioning a reboot of our family “swing” photo that we used to take at my mother-in-laws home for so many years. Looks like I need to start looking for a swing for our yard! ❤️💙
It’s National Cookie Day! 🙌🏼🙌🏼🙌🏼 What’s your favorite Christmas cookie to make? Hands down mine is a Mexican wedding cake cookie…it was my dads favorite cookie and it’s seriously one of the easiest and tastiest cookies you can make! Tonight I made a little over 15 dozen for my annual cookie swap party and of course, I had to sample a couple throughout the process. Happy to say they passed the deliciousness test! 😂 I’ll finish them up tomorrow by rolling them in confectioners sugar once again…and I might have to taste test one last time. 🤷🏻‍♀️
The Designs by Lolita “Pretty as a Poinsettia” Wine glasses are just what I needed to complete my dining room Christmas tablescape! (Thank you so much, Lolita!!! ❤️)🍷 Can’t wait to entertain with them too! ❤️🎄 Meanwhile, there is still time to order your own Christmas wine glasses and get them by Christmas! (Designs by LOLITA is tagged in this post!). They are so perfect! 🍷