NOTE:  Fiesta Fridays is a special series to highlight the many memories I have of fiesta through the photographs I’ve taken since 2003.

Fiesta 2014 brought us a series of “firsts” to our event.  One of the biggest was getting our “first” Title Sponsor.  Our top-level of sponsorship had always been “Presenting” and we had toyed with the idea of having a Title Sponsor.  The conversation ignited when Santiago Negre, Hispanic owner of numerous area McDonalds arrived in town.  He is the type of person who gets involved in the community and found Fiesta a way to do just that.  McDonalds had always been a Presenting Sponsor but this was the year we asked and he said “yes” to Title Sponsorship! 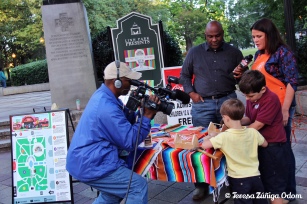 Home Depot discussed craft items in store for kids at the Family Village. Nicky and Vincent Koch help with the demonstration! 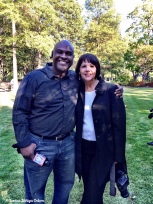 Photo opp with Jeh Jeh Pruitt! I was there to photograph the interviews at Linn Park that day.

We were thrilled, to say the least!  And in addition to taking the Title Sponsorship, Santiago also arranged to have the Fiesta Tour come to Birmingham.  This was a tremendous coup for us as this tour typically only presents in the largest markets like Chicago, Los Angeles, and the like.  The Fiesta tour – appropriately named (in our humble opinion) – is like a Latin Grammy Experience!  It’s a 50 foot trailer exhibit with a walk through display of unique artifacts and memorabilia loaned by Latin musicians.  You get to see items belonging to such artists as Jennifer Lopez, Celia Cruz, Jose Feliciano and Marc Anthony.  It also features a live DJ, music kiosk and kiddie area with a photo center.  The Fiesta tour was set up right at the entrance so attendees bought their ticket to the festival and could walk directly through the exhibit.  It was such an exciting addition to Fiesta that year! 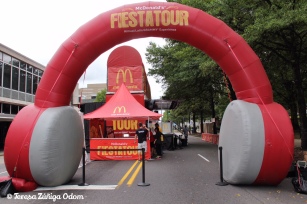 Getting set up for the day… 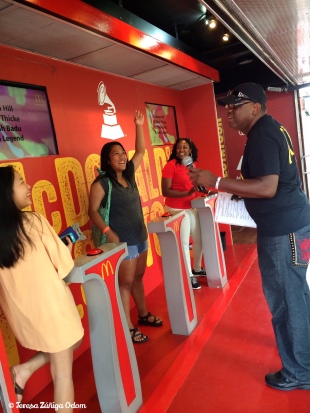 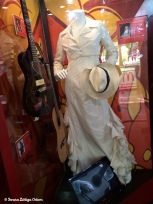 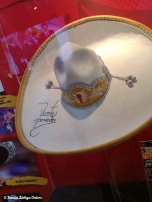 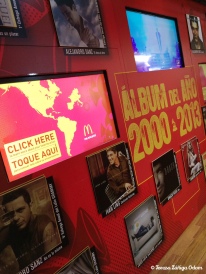 Fiesta Event Manager, Denise Koch greets the Fiesta Tour when it arrives Friday before the event

Another “first” was having a parade of flags, along with the flag ceremony and the Pledge of Allegiance at the event and this was thanks to the Girl Scouts of North Central Alabama.  Marisela Mendez is a powerhouse of a woman (now retired) who was a huge force in engaging Hispanic girls and their families into scouting in our state.  She arranged to have girl scouts from around the region attend Fiesta and dress in traditional costumes to carry the flags of Latino countries.  She also had a group experienced in the presentation of the colors on hand, and in uniform to lead the event in the Pledge of Allegiance from the main stage.  It was such a beautiful and colorful sight that year!  The girls were gorgeous in their dresses and throughout the day I would see them around the park with their families enjoying the day. 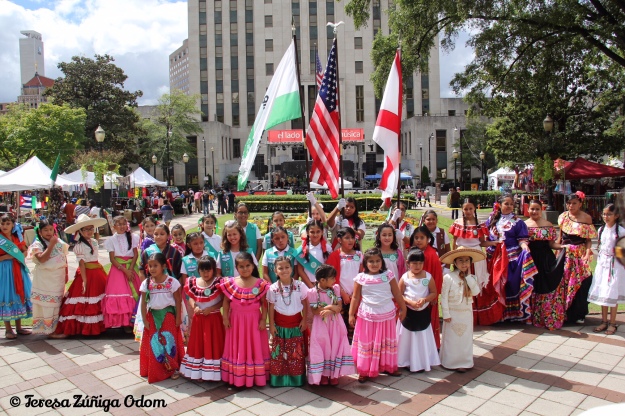 Photo of all the Hispanic Girl Scouts who participated in the 2014 Fiesta event in costume and Girl Scout uniforms. 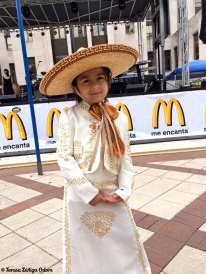 Hispanic Girl Scouts of North Central Alabama lead the festival in the parade of flags. 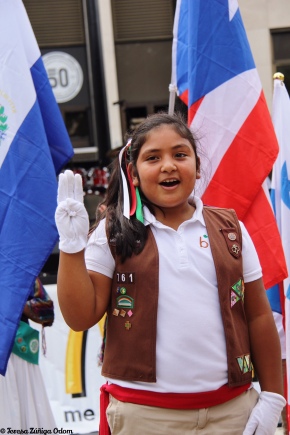 Hispanic Girl Scouts of North Central Alabama present the flags of the nations, pledge of allegiance and the Girl Scout promise.

Photo Opp for me with these precious girls!

This looks like we are having a nice conversation when in fact, this little girl kept telling me I was saying her name wrong! Such a cutie!

At one point, I was next to the Coca Cola Main Stage with my daughter, Anna Marie, when we saw one of the girls twirling to the music.  Her pink dress was floating as she twirled and she was clearly in her own little world with the music.  Anna Marie and I began taking pictures of her when one of her friends saw us and decided to twirl with her.  It was such a sweet moment and I’m so glad we caught it. 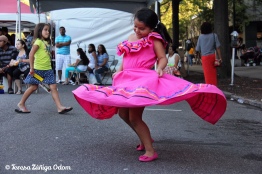 The Twirling Girl in her pink dress…I simply love this photo from Fiesta 2014 and the pure joy of this photo!

Two twirling girls…they clearly loved the way their dresses swirled in doing this to the music from the Coca cola Main Stage.

Me and my daughter, Anna Marie. She came out to help me as I walked around the park that morning documenting all the booths and other activities.

This was also the year we were able to grant a wish to a young Hispanic girl who was seriously ill and in Children’s Hospital of Alabama.  She wanted to meet her favorite musical artist – El Dasa – and we arranged to make that happen with the help of Amado Santos, Patient Relations and Language Services Director.  El Dasa was so gracious too.  Jasmine – the young girl – was taken by wheelchair to his personal tour bus and along with her parents and brother, were able to meet him and have a short visit.  The sweetest moment came when Jazmine gave him a drawing she made.  It was of a pair of cowboy boots and a hat,  similar to what he wears for his performances.  He was so sweet to her, asking her about the drawing and other things that she enjoyed.  He was truly interested in her and wanted to make this a good experience…that was clear.  A local news station came out to cover the meeting and at the end, El Dasa posed for pictures with the family and the drawing before heading to the stage for his performance.  I enjoyed being a “fly on the wall,” as they say and being able to witness this special meeting.

Jazmine is wheeled to El Dasa’s trailer by her father and followed by her mother. Amado Santos from Children’s Hospital is behing her and helped arranged for this meeting.

Jasmine smiles broafley as El Dasa speaks to he. 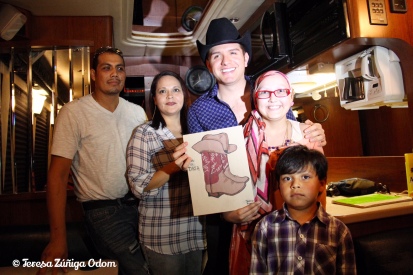 Jasmine and her family pose for pictures with El Dasa as he holds the painting she made for him.

El Dasa give a lively performance on stage!

More to come so please come back next Friday to hear about Fiesta 2015!

‘Twas the night before Fiesta and all through Linn Park…not a creature was stirring…well, THAT’S not exactly true!  Fiesta’s event planner extraordinaire, Denise Koch of Denise Koch Events, was there working with the tent company, and others to get the park ready for Fiesta 2014 tomorrow!  Remember, Fiesta takes place tomorrow – Saturday, September 27th, from noon to 8 p.m. in Linn Park…admission is $8 at the gate and children 12 and under attend for free!

Here are a few photos of the event prep and also Fiesta’s morning on Fox 6 News with Jeh Jeh Pruitt to promote the event. 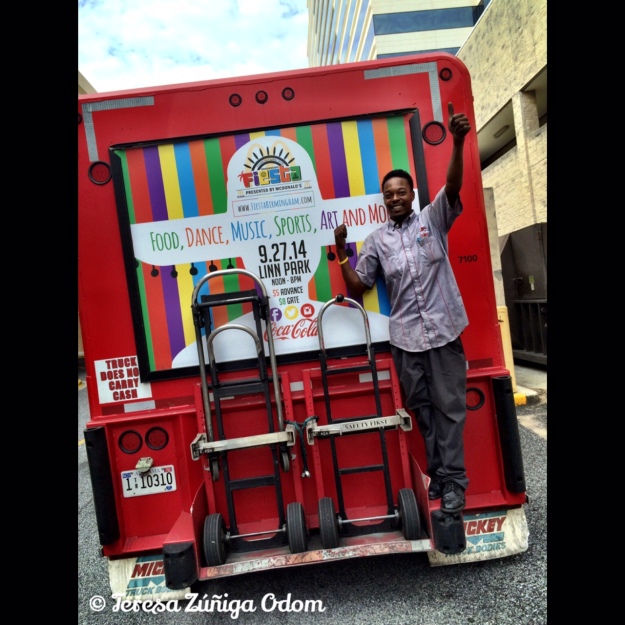 It’s always fun to find a Coca-Cola Truckback with the Fiesta poster every year!

Our event planner, Denise Koch, works on getting the signage up in Linn Park. 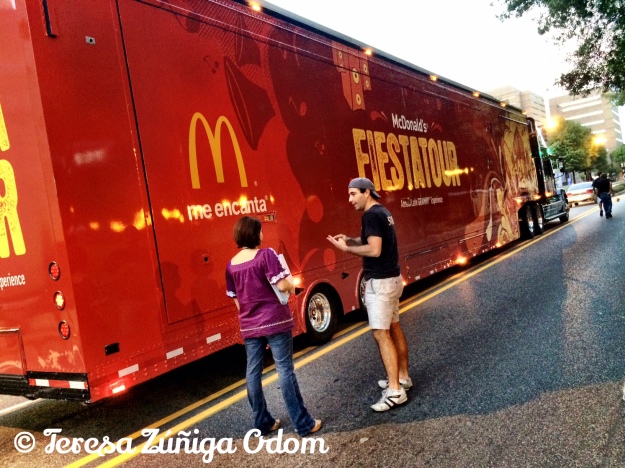 The McDonald’s Fiesta Tour arrives at the park! This exhibit is so incredible – can’t wait to see it again!

A look at some of the Fiesta signage and the FiestaTour in the background in front of Boutwell Auditorium. 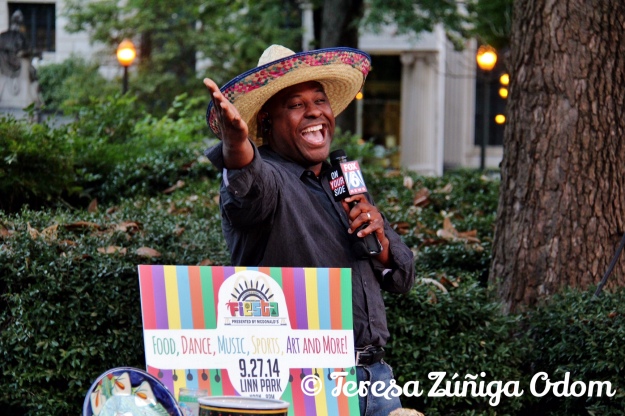 Jeh Jeh Pruitt gets into the first Fiesta segment on Fox 6 News! He really liked that sombrero!

Ronald has fun with Nicky and Vincent Koch in between Fox 6 News segments. 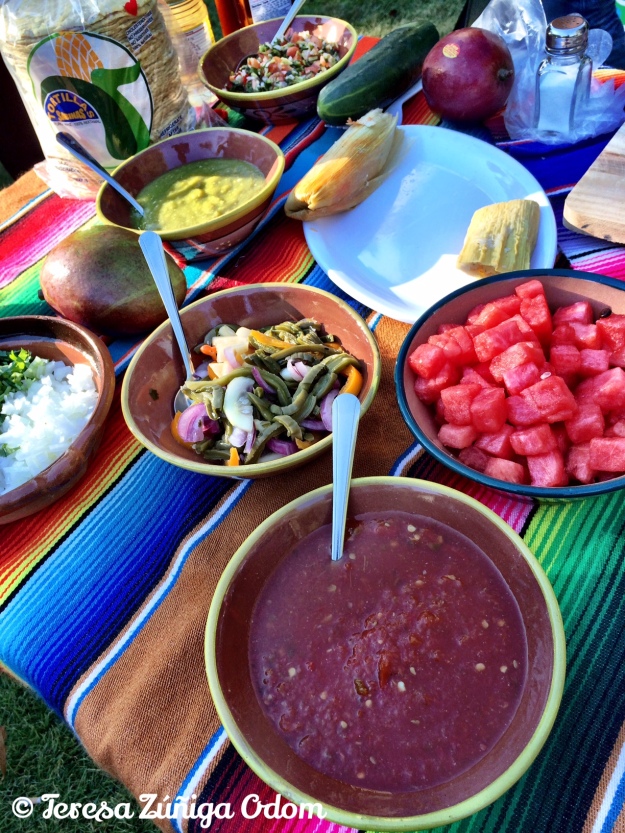 Cooking segment featuring Mi Pueblo on Fox 6 News – the food at Fiesta is always the best!

Table set up for the Fox 6 News Segment.

Photo opp with Jeh Jeh Pruitt in between Fiesta segments. He’s such a fun guy!

Having my three children together today was such a gift…🥰 and being with my three baby grands was the icing on the cake! 💖 I look forward to the day where we can do this more often but until then I’ll treasure the time I can get with them all together. ❤️ .
My Baby Grand Evie is 8 months old today! It’s been over four months since I’ve been able to hold this sweetheart of a child and tell her all the fun we will have together…and I can wait to see her later this month when she’ll be in Alabama for a visit! Love you Miss Evita! 🥰
My baby had a baby yesterday! Harper Ruth Brown was born Saturday, May 14, 2022 at 9:08 p.m. She weighed 6 lbs and 13 ozs and is 19-1/2 inches long. 👶🏻 She is our third baby grand in 3 years and we (Pappy and Tisa) couldn’t be happier - just more spoiling to do! 👶🏻 So thankful that I could be in the room when Ruthie was born and I loved the fact that the doctor who delivered Ruthie also delivered my Charlie and Anna Marie in 1989 and 1991! Talk about full circle! 👶🏻 Our Baby Ruth is so precious and she has the best mama and daddy. 🥰
We’ve had some new birds show up to our bird feeder this week! A blue bird has decided to hang out this week and I’ve loved having this “blue bird of happiness” around. 🥰 The brown thrasher has also been a fixture this week and he’s so big! I’ve watched him struggle a bit to stay on the bird feeder but he certainly doesn’t give up! 😂🥰 Finally, we have several hawks that apparently love our yard and on Monday, one flew right in front of me in our front yard carrying a little chipmunk 😢 - I was stunned that one got so close to me and even though it was a split second experience, it was clear to me what a gorgeous bird this was… and also there’s a circle of life thing going on in our little cul de sac.