Whispers from the Past – October 2017

There is an event called Whispers from the Past that takes place each fall at Aldridge Gardens in Hoover.  I’ve always wanted to go but for some reason or another, I’ve never made it.  This year I was determined to go and I knew my mother would love it so we made plans to go.  The event is designed to provide attendees with an accurate portrayal of the lives – both past and present – of Native Americans in the Southeast.  There are approximately 530 different tribes in the US, each with its own customs and language.  That day we were just hitting upon a handful and the event  definitely lived up to its educational purpose.

We arrived just in time for the first dance demonstration – the Native American Pow Wow dancers.  As the dancers prepared their beautiful regalia, we listened to Alex Alvarez as he introduced each dance.  We learned that Pow Wows are the Native American people’s way of gathering in dance, song and friendship.  He went into great detail about the regalia, the significance of all the regalia, the reason for the dance and also a little information about each dancer who had traveled from all over the Southeast to participate in the event. 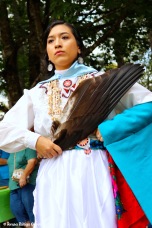 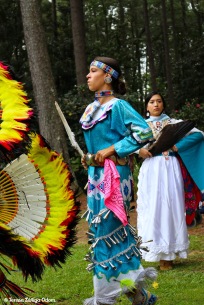 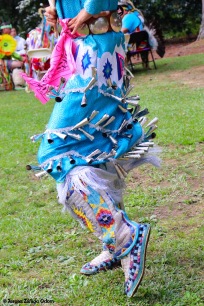 One dancer in particular, a young woman, wore a dress with metal cones that jingled when she walked and danced.  Alex explained that this was a healing dance and that there were several versions of a story involving a dream where the dress to be worn along with the dance and song to be performed appeared to a person.  Instructions on how the dance and costume would be used were spelled out in the dream.

The dance with the men wearing the bustles was incredible!  I think the back of the clothing in this instance was more striking than the front.  The dance signified the retelling of stories of the hunt to their tribe.  The beaded moccasins were adorned with fur from Icelandic sheep.  Alex mentioned that when a Native American wears something from an animal they are asking for that trait to reflect upon them.  The bone bead breastplates were worn to keep arrows from piercing their chests and the head-piece was made from porcupine.

There were several other dances and I hate that I lost track of their significance.  Taking notes while photographing was a little difficult! That’s why I let my photos tell the stories at times.  This is one of those times! 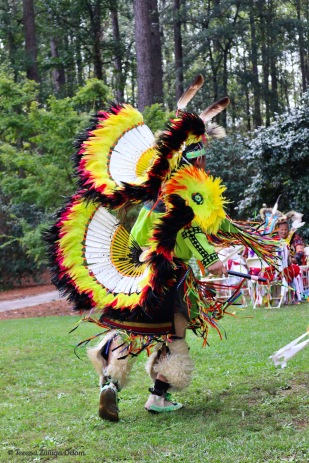 This was a very kid-friendly event with activities galore!  One that mom and I found very beautiful was leaf pounding….and it’s just what it sounds like!  We walked around the back of the Aldridge Gardens house and there were people placing leaves between two strips of white cotton fabric and pounding the leafs with a rock to make the transfer.  Some of the designs were really beautiful too!  Mom and I picked up the instructions and decided to try this at home.

Other families were making dream catchers together.  These are so iconic when you think of Native Americans.  We thought about making one ourselves but then mom spotted artist Jim “White Cloud” Hill doing a sage cleansing on someone and she was intrigued!  We walked around after watching a cleansing but she kept mentioning it so we went back so she could experience this. 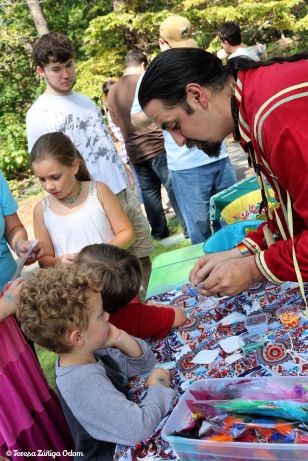 The use of smoke is not uncommon in religion.  For Catholics, incense is used during mass and it is also used by Buddhist and others.  To many people it can symbolize spirituality.  For Native Americans,  the cleansing is done using a large feather to fan the smoke in order to rid the person from any negative energy and help with healing.  I could tell this ritual was having quite a positive effect on my  mother as I watched this play out.  She smiled sweetly as she followed Mr. Hill’s instructions during the process.  Afterward, he gave her a hug and maybe it was my imagination, but she appeared “lighter.” 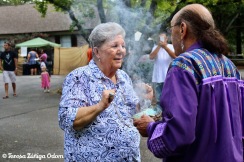 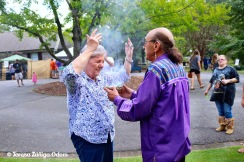 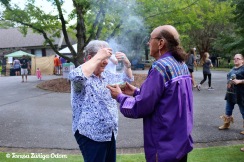 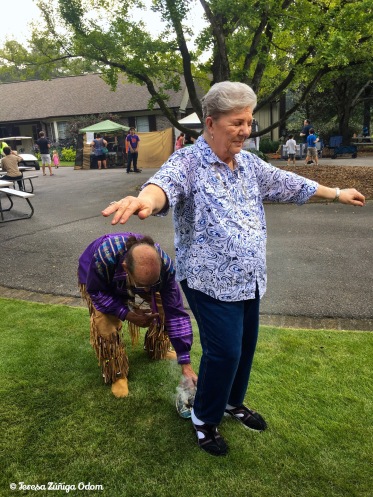 A hug from Mr. Hill after the cleansing.

Mom and I learned a lot that day at Aldridge Gardens.  It left us wanting to know more and I hope we can find other ways to learn about Native American culture in Alabama.  I know there are opportunities… 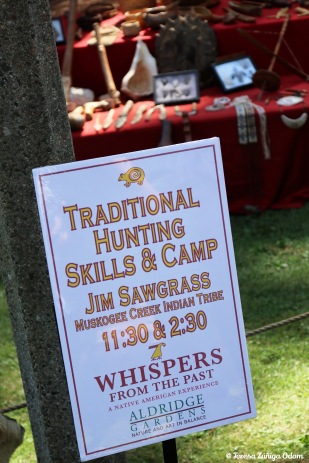 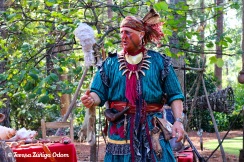 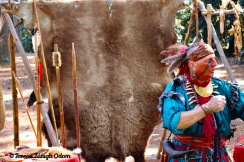 Mom chats with two of the pow wow dancers

Selfie with mom at Whispers from the Past – we had a great time!

4/52 Experience number four was a little bit of a cheat for me…it was to attend Birmingham Restaurant Week which I’ve done before, but in the past it’s been as a food blogger so I was always working. This time, I attended as a guest and my husband came along. We sat at a table and before I knew it, he was bringing me all the food! 😂 Honestly…why didn’t I think of this before?! We had so much fun and got to hang with some great friends. 🥂 Several of my Fiesta family were there and we took plenty of photos. We had a blast together 🥂 Biggest discovery tonight…Rusty’s BBQ’s greens and cornbread!!! OMG!!! I told Rusty I had no idea about this dish he serves and I could probably eat just this as a meal!!! So I need to head to his place in Leeds soon and have some more! 😂 Another new experience was getting into the 360 Photo Booth. This is my first experience and if you were to see the video you’d realize pretty quickly that I’m new to this and I have a lot to learn from my Fiesta daughters who vamped it up for the six or so seconds the camera ran over us. Still, I enjoyed it no matter how stupid I looked. 😂😂😂 Finally, I loved the added touch of a calligrapher engraving Stella Adoris glasses for guests. I used my blog name on the glass and asked the calligrapher to add the tilde to Senora (over the n) at the end of the event. 🥰 It was the perfect souvenir from the night. Now onto experience #5 next week! You know…I’m seriously enjoying this year of weeks. So far it has been a blast!
3/52 My third in 52 experiences this year was to visit the Alabama Wildlife Center and see what it’s all about! 🦅 Honestly…I can’t believe I’ve never been here because it’s been in existence for 45 years and as a wildlife rehabilitation center they have helped over 50,000 birds! I loved hearing about their journey and getting to see an owl close up (named Dr J), a white leucistic red tailed hawk (similar to albino but with just a little color) and the release of a rehabilitated barred owl which was so sweet. The little guy flew off into the nearest tree. ❤️ 🦅 Added bonus was getting to see my long time friend Linda Miller who has been involved with the AWC (she just rolled off its board!) for ages! 🦅 I look forward to going back to the center and maybe even volunteering at some point. The AWC is certainly a gem in our community doing wonderful work!
My January “new wine” selection is this Oberon Los Carneros 2020 Chardonnay from Napa Valley! 🍷 I’m pairing it with my Designs by LOLITA Song Birds wine glass because I have to tell you…the birds have been emptying a bird feeder every other day at my house…but I’ve loved watching them all from my kitchen window. But I digress…🥰😂 🍷 This wine is light and just what I needed this evening. I’m tasting pear and apple…lots of apple and a tad bit of crème brulee so you can’t go wrong with those flavors! I did a little research into this wine and I also discovered it spent 9 months “sur lie” in 33% new French oak. Sur lie translates to “aging on the lees” which adds extra complexity and flavor to a wine. I may need to read up a little more on that! Meanwhile…cheers to the weekend! It’s funny how I’m retired but I still look forward to the weekend! 😂🥰.
A few years ago I made a promise to myself that I would only buy things at the thrift store that I would absolutely use in my home. I’ve pretty much stuck to that promise and in the process I’ve discovered what I’m most drawn to (glassware) and what I need to stay away from (glassware)! 😂 Lately I’m drawn to frames and today I found several photo frames that I’m eager to use. I have a plan to line my stairway with family photos and several of these will be perfect to use! 🥰 There are also times when I really luck up on something that I find very valuable and sentimental and I can’t resist getting it…especially when I see the price! Today I spotted this honeycomb (or hexagon) quilt top hanging among bedspreads and blankets out of the corner of my eye. I couldn’t believe it was only $13.99!!! The detail and time it took to put this quilt top together doesn’t escape me. I sometimes wish I knew how to quilt but I also know I don’t have the patience for it however ❤️ I truly appreciate finding such a treasure because I have several family quilts and they mean so much to me. I’m adding this one to the collection and hopefully it will become a family heirloom someday. 🥰 Meanwhile, my 2023 thrifting hobby is off to a great start! 🙌🏼