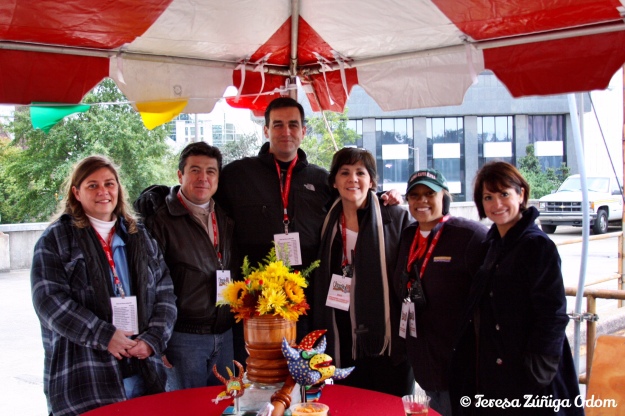 Some of the Fiesta team all bundled up for a group photo – Fiesta 2009 – the coldest event in our then 7 year history! (Lto R – Stacy Kimbrough, Phil Sandoval, Mike Suco, Me, Jamika Kirk and Denise Lovoy Koch)

NOTE:  Fiesta Fridays is a special series to highlight the many memories I have of Fiesta through the photographs I’ve taken since 2003.

Back when the Fiesta board was getting the festival started, we were always told the best time of year to have an event was late September through mid-October.  We loved hearing this because having the event during Hispanic Heritage Month – which falls between September 15 and October 15 each year – was our plan.  We were fortunate to have wonderful weather for six years in a row…and then we got to 2009…and the tables turned on us.  It was SO COLD!!!

To me this was a true test of our event.  Would people come out to our event in the cold?  Better yet, would they come out and STAY?  The answer was yes and YES!  You’ve heard of “fair weather friends,” – well, that year we discovered we had “all weather friends!”  We had many new patrons come through, but when I look back on the photos from this particular year, I see so many friends who threw on coats, hats and gloves and came out to Fiesta despite the cold!

Helen Rivas works on the Guatemala booth in the Cultural Village.

Stacy and Shae get the information booth ready for the day. 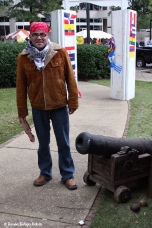 Ceasar Marfil prepares the Mexico booth in the Cultural Village and added this cannon! 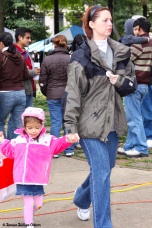 My friend Angie Vilches with her young daughter Lucia.

My friend and early supporter of Fiesta – Jennifer Hatchett with her daughter, Savy, enjoy the balloon man in the Family Village.

My son, Charlie (Carlito) – on the right with his high school friend, Juan Carlos Siles

My daughter, Emily works with children in the Family Village

All bundled up! My family including Emily’s friend – Abbie Calhoun, Emily, Anna Marie, my mother – Barbara Zuniga and Charlie

This was also the year we highlighted some of the Fiesta scholarship winners by creating posters to display at the event.  We really wanted to put a face on scholarships for Fiesta patrons.  The posters contained the recipient’s photo and name, along with their major and a sentence or two about what it meant to win the Fiesta scholarship.  While most people who attend our event know they are coming to a Hispanic cultural festival, many don’t know about the reason Fiesta was created in the first place – to award scholarships to deserving Hispanic students who have a need in our community.  The money is raised each year through the event sponsorships, donations and the admission tickets.

A student volunteer prepares the scholarship posters for display.

Board Member – Phil Sandoval – was in charge of monitoring the Fiesta Scholarship donation barrels.

In 2008, we awarded $5K each to Samford University, University of Alabama at Birmingham and Miles College to create a Fiesta scholarship at each school.  That was the largest award we had ever made in one year due to the success of Fiesta the previous years.    I remember how excited the board members were to do this and we really felt as though Fiesta had arrived and reached the potential we had all hoped for in the early years.  The students featured on the posters were the ones who received the 2008 awards.  Many participated in Fiesta in some way and that made the awards even more special to us.

More to come so please come back every other Friday through September 30, 2017, for more behind the scenes stories of Fiesta!

There is a really unique building across the street from the Alys Stephens Center at UAB.  Have you ever noticed it?  It’s the University of Alabama’s Abroms-Engel Institute for the Virtual Arts or in short the AEIVA! 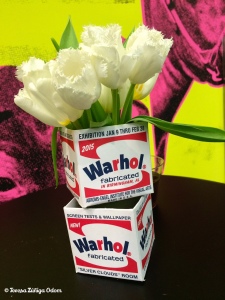 I first learned about AEIVA when they featured an Andy Warhol exhibit called “Fabricated,” in January last year.  It was the first major show by a renown artist for the Institute since they opened and it definitely got my attention.  I went to the opening night reception with my friend Suzanne and we walked around with quite a crowd looking at all the iconic works of art.  Some we hadn’t seen before.  I realized that night how fortunate we are to have AEIVA in Birmingham and for the art community.

AEIVA is named for lead donors Judy and Hal Abroms and Ruth and the late Marvin Engel and features three galleries along with a 95 seat lecture hall.  The building is also the home of UAB’s art galleries and the Department of Art and Art History classrooms and faculty offices.  AEIVA’s mission is to enhance social, cultural and historical understanding through the visual arts across UAB and the broader community.  I especially love that it’s right across the street from the Alys Stephens Center, another UAB gem! 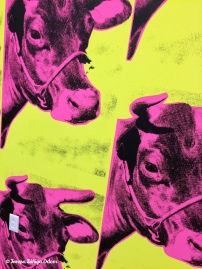 In September, I went by AEIVA to see another exciting exhibit.  It was the beginning of Hispanic Heritage Month and it seemed appropriate to visit and see the works of Cuban born artist Luis Cruz Azaceta.  The topics he covers aren’t the happiest, to say the least.  The title of the exhibit was “War and Other Disasters – Selected Works from 2002-2016.”  You have to admit, the title alone is a curiosity.

As I walked through exploring Azaceta’s works, I discovered these are all based on well-known happenings.  The first work looked like the largest matchbook car exhibit I’ve ever seen.  As you get closer, you realize it’s the evacuation during Hurricane Katrina.  Azaceta had been a native of New Orleans for ten years when Katrina happened so it was only natural for him to want to create and include this in his collection.  It’s incredible and takes up most of the first gallery. 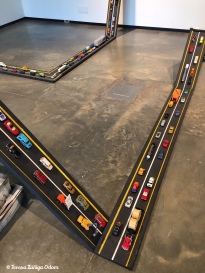 Other featured works include “9/11 WTC” which was really moving.  As you look into the piece there are photographs – for instance an “I Love New York” coffee cup in one.  I felt like I was standing in the dust of the towers as they fell while looking at this piece.  It’s just that powerful.  “The Border” is about the ongoing issues regarding security and control at the Mexican/American border.  As we all know, this debate continues especially in the current political environment.  Everything surrounding the fence reminds me of the craziness of our current immigration system and the need for reform.

Description of the 9/11 WTC piece

The Border by Luis Cruz Azaceta

Another current topic comes through in “Hands Up, Don’t Shoot.”  Azaceta created this in 2015 after the shooting of Michael Brown in Ferguson by a white police officer.  The artist has been vocal about this movement and it comes through in this painting.  “Spill 4” is about the Gulf of Mexico BP oil spill in April 2010.  You can see the black oil making its way through the environment on this canvas.  I remember how the beaches looked after this disaster and that 11 people lost their lives on that oil rig.  The amount of oil that took over the beaches and ocean was just unbelievable.

Hands Up by Luis Cruz Azaceta

Azaceta was born in Havana, Cuba and lived there until he emigrated to the United States at the age of 18.  As a boy he witnessed many acts of violence on the streets of Cuba during the Batista regime and during Castro’s post-revolution.  This impacted him greatly and created in him a sensitivity towards violence, human cruelty, injustice and alienation.  These became central themes in his work as he showcases the moral and ethical pulse of our country.

The Azaceta exhibit runs through December 17th and I encourage you to go by and have a look for yourself.   You can also follow the AEIVA on Facebook to get the latest on exhibits and other special shows.  As I said, it’s a gem in our community and I’m so thankful to the Abroms and Engel families for their generosity.

Having my three children together today was such a gift…🥰 and being with my three baby grands was the icing on the cake! 💖 I look forward to the day where we can do this more often but until then I’ll treasure the time I can get with them all together. ❤️ .
My Baby Grand Evie is 8 months old today! It’s been over four months since I’ve been able to hold this sweetheart of a child and tell her all the fun we will have together…and I can wait to see her later this month when she’ll be in Alabama for a visit! Love you Miss Evita! 🥰
My baby had a baby yesterday! Harper Ruth Brown was born Saturday, May 14, 2022 at 9:08 p.m. She weighed 6 lbs and 13 ozs and is 19-1/2 inches long. 👶🏻 She is our third baby grand in 3 years and we (Pappy and Tisa) couldn’t be happier - just more spoiling to do! 👶🏻 So thankful that I could be in the room when Ruthie was born and I loved the fact that the doctor who delivered Ruthie also delivered my Charlie and Anna Marie in 1989 and 1991! Talk about full circle! 👶🏻 Our Baby Ruth is so precious and she has the best mama and daddy. 🥰
We’ve had some new birds show up to our bird feeder this week! A blue bird has decided to hang out this week and I’ve loved having this “blue bird of happiness” around. 🥰 The brown thrasher has also been a fixture this week and he’s so big! I’ve watched him struggle a bit to stay on the bird feeder but he certainly doesn’t give up! 😂🥰 Finally, we have several hawks that apparently love our yard and on Monday, one flew right in front of me in our front yard carrying a little chipmunk 😢 - I was stunned that one got so close to me and even though it was a split second experience, it was clear to me what a gorgeous bird this was… and also there’s a circle of life thing going on in our little cul de sac.