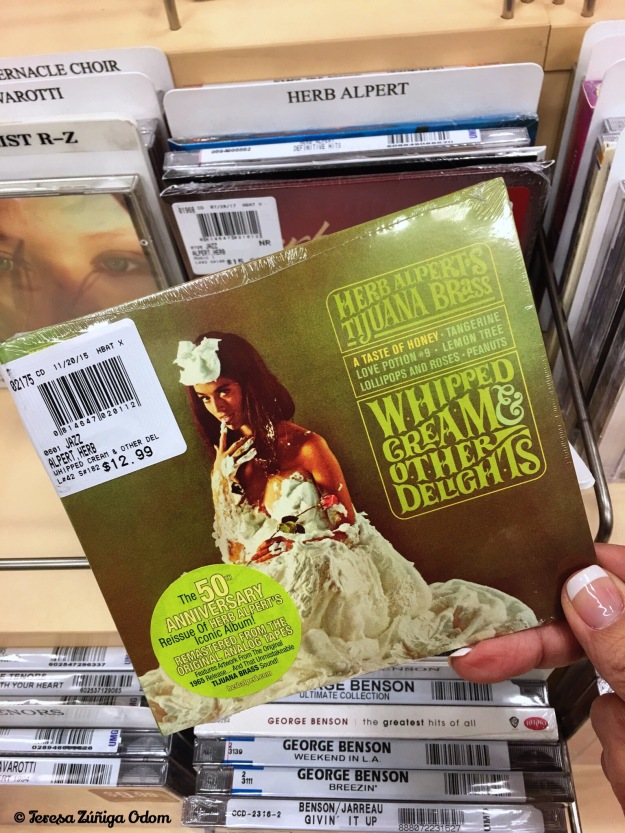 Back in the 60’s, we had a TV, radio and record player combo made by Magnavox.  It was really a piece of furniture and my dad loved the Magnavox brand!  I remember when we lived in Puerto Rico the Magnavox was in our family room and it pretty much divided our kitchen from the family room.  Mom and dad had quite the album collection and me and my sisters loved pulling out records and playing them on the Magnavox.  You could stack several records and when one finished, the next one would drop from the silver stand in the middle of the record player and the music would just continue.  I guess you could call it a precursor to Pandora!

One of the records that I always loved to play was the Herb Albert and Tijuana Brass Whipped Cream and Other Delights.  The album cover was iconic and featured a woman in a shaving cream and chiffon dress and hat.  This may have been the bands most popular album and several of their songs were featured on the 1970s game show, The Dating Game hosted by Jim Lange.  This was one of those times when I heard a song on a TV show and realized who the artist was!  At the time, we just loved the brass music and me and my sisters and mother would dance and dance around the family room to this album! 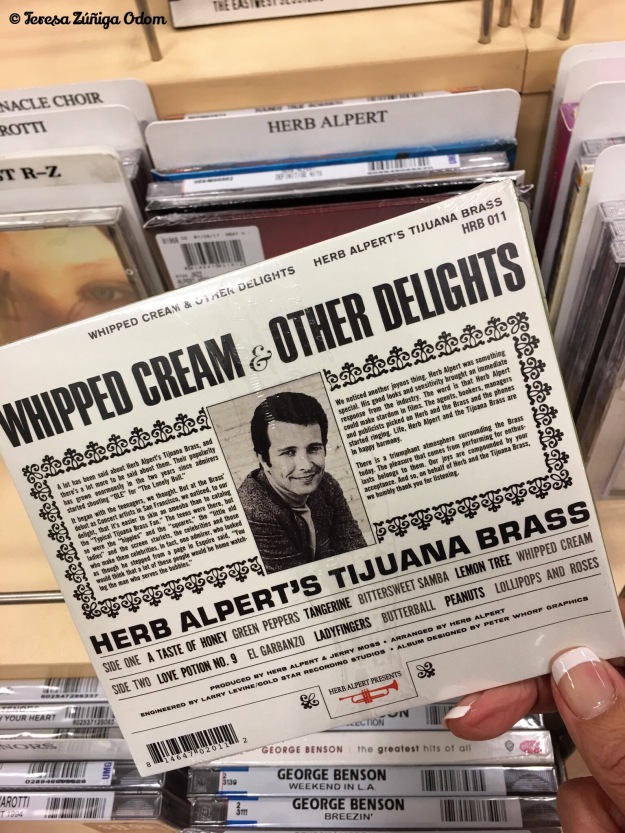 Music on the Whipped Cream – Herb Albert album. I loved listening to this album when I was little!

I was watching Hallmark Home and Family one morning a few weeks ago and Herb Albert was on the show promoting his new Christmas album, The Christmas Wish!  As he played one of the songs on the album, I had a major flashback to being 7 or 8 years old and listening to the Whipped Cream album.  Every year I like to add a few new Christmas albums to my collection and I knew I had to have this one!  Later that day, I headed to my local Barnes and Noble and there it was…and off I went to the checkout!  All the songs are familiar Christmas songs but with that Tijuana Brass sound,  I so look forward to playing this after Thanksgiving!!!  Yes, I did listen to it as soon as I purchased it but I do like to wait until after Thanksgiving to really crank up the holiday music!  So come, November 24th, that cd will be played non-stop! 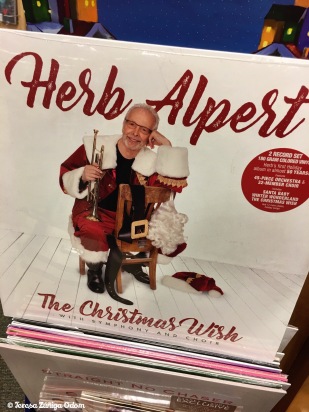 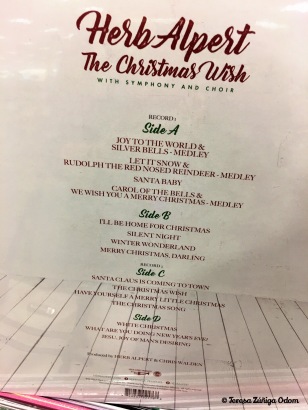 Song on the 2017 Christmas album by Herb Albert

On a side note, I really want to find that Whipped Cream album – not the CD – the album!  I think one of my sisters has the album we listened to as children, but I’d love to have one of my own!  I was at the thrift store recently and they have an album section.  So, I looked through the section on the off-chance I would find it.  I didn’t, but instead found Herb Albert’s 2nd album called Volume 2!  Ironically, when I looked the album up online, I found out this one didn’t fare so well initially after the release of their first album.  No matter to me though…it still has that iconic Tijuana Brass sound and I was thrilled to find something by Herb Albert and in this case, for just $2.  Meanwhile, I do plan to add the Whipped Cream album to my collection before the end of the year!

It’s spring time and Designs by Lolita has some really gorgeous new wine glass designs out! 🍷With all the bird watching that I do, I’m naturally drawn to the new Songbirds glass. 🍷 And the blooming spring flowers had me photographing my Cherry Blossom glass against my neighbors camellia bush. 🍷 And finally, our azaleas were really showing out this year and looked gorgeous against my Wine Not glass. 🍷 I have so many more glasses that I can share but these are the ones that are bringing the most joy right now. 🍷 Head over to the @designsbylolita_ website to order your own wine glasses. The Song Birds and Cherry Blossom designs are back ordered and available first part of June but the Wine Not glass is currently in stock! Let me know if you order any and CHEERS!!! .
Two years ago I introduced cascarones at Easter to my extended family and I love how they embraced this Mexican tradition in our front yard. I wrote a blog post about these cute little confetti filled eggs and the religious significance at Easter. (Check the link in my bio.) I thought I would make my own cascarones last year but of course plans changed due to the pandemic. Meanwhile, I’ve loved finding egg cartons of these confetti eggs at my local Walgreens. And just yesterday I found them at my local Michael’s store! It seems these colorful eggs have grown in popularity and I love that. I bought a few cartons for this Easter even if our extended family won’t be with us. We will crack the confetti eggs over the heads of family who are able to gather together on Sunday and extend good fortune to one another. If you celebrate with cascarones, drop me a note below! I’d love to hear about it! .
🐇 “April dressed in all its trim, hath put a spirit of youth in everything.” - William Shakespeare
Happy birthday to my guy...🎂 Late this afternoon we got to celebrate together by enjoying a dinner of PF Chang’s followed by our usual family favorite, Edgar’s cupcakes! It was nice to feel normal and have an actual date night where we could relax and just talk. I know we are both looking forward to more evenings like the one we spent today. Meanwhile...happy birthday, my love. Cheers to you and another wonderful year 🥂🎂❤️