We have a bird feeder right outside our kitchen window.  To be honest,  we’ve had some sort of feeder on the deck for years.  At first I wanted one so that I could admire the cardinals that I saw in our yard from time to time.  It would bring me comfort seeing them and when they started enjoying the sunflower seeds we were leaving in the feeder, that made me happy.  I’m sure you’ve heard the saying that when a cardinal visits, it represents someone you love who has passed coming to see you.  The cardinal was my dad’s favorite bird so I always associate seeing one with him.

Ever since my retirement about 3-1/2 years ago, I love to take time to sit at the kitchen table and have coffee, or do a little paperwork and occasionally glance up and see cardinals at the feeder.  Eventually, more birds began to find out about the great seed we had and we welcomed a larger variety of birds to the deck.  It was just nice to see them interact and share the bird feeder with the cardinals and I loved watching how they maneuvered the feeder openings, each taking turns to grab the perfect seeds.  I always get the urge to take photos when I see birds but with only my iPhone handy at the table, the photos would be blurry and not worth saving.  That’s when I decided to start leaving my Canon camera on the kitchen table. 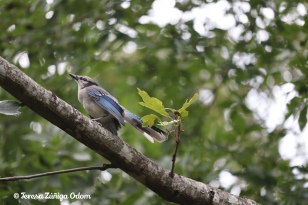 Of course, as we sheltered at home during the early days of the pandemic, I found myself sitting at the kitchen table more and more after my morning walks with my dog, Lucy.  As spring arrived, I started sitting outside on the deck fairly close to the bird feeder.  The birds were skittish at first, as I figured they would be.  But eventually, they would fly up to the feeder and eat while I sat on the deck furniture sipping away at my coffee and listening to podcasts.  I would take my camera outside with me and ever so carefully raise it to my eye to snap a few shots.  I managed to get some really lovely photos over this time period.  I discovered after many hours of bird watching that male Cardinals feed their mates!  This was such a lovely sight to see and I managed to catch a few photos of that. 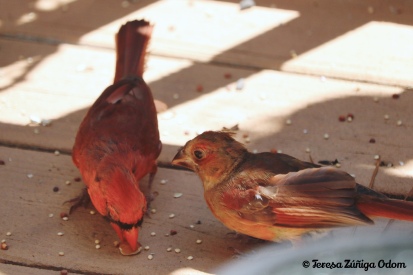 Capturing this shot was so exciting! Male cardinals feed their females!

Captured this male cardinal feeding the female right from the bird feeder!

My husband even got into bird watching while he worked from home this year and eventually retired on August 1st.  We could be in the middle of a conversation in the kitchen when a bird we didn’t recognize would fly up and we’d immediately stop and watch and then google – “what type of bird has x-colored wings and and a x-stripe?”

Around this time, I heard a story on NPR about how birdwatching had become extremely popular with people during the pandemic.  I mean, it made sense.  You’re cooped up in your house and you really can’t go anywhere.  So you go outside to your yard and there’s nature, am I right?  And of course, spring is an active time for birds – right when the pandemic was in full swing – so its inevitable that you see birds and their babies! I think the key here is that people were noticing birds because it was quieter outside.  I also think that watching birds gave people a sense of freedom and feeling that they could fly away themselves.  They made me feel like I had friends in nature who depended on me for a little nourishment.  There were times when I would walk on to the deck and the bird feeder would be empty and I could hear the birds chirping away at me as if to say – “We’re hungry, lady!  We need more food!”  That always made me smile.

Woodpeckers sharing the feeder with a little bird

I love capturing birds in the trees too. Their coloring against the green leaves is so beautiful!

As I walked my dog every morning this spring and summer, I became even more aware of birds everywhere!  There were hardly any cars in my neighborhood during my walks and the distant sound of the highway was pretty quiet too.  Somedays I felt like Snow White seeing all the birds flying around and chirping and figured it was just a matter of time before the birds would be following me and I would stretch out my arm and they would land on it.  I actually had a close encounter one morning when a bird swooped down right in front of me.  Of course, at other times, I worried it would be more like Tippi Hendren in the Alfred Hitchcock movie, The Birds!  This was especially true several days when I saw a bird get into a fight with a squirrel and then several days later, a bird chased a squirrel under a car!  That wasn’t something I had ever experience before and I wish I had been able to video because it was so freaky! 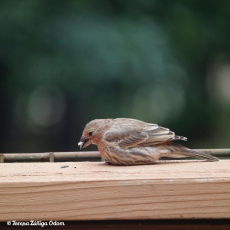 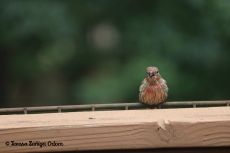 One of the best bird sightings was in my own backyard.  It was late one afternoon and Eddie and I were sitting on the deck when a hawk suddenly flew into a tree directly in my sight.  Eddie had his back to the hawk and I told him to sit very still while I slowly slipped inside the kitchen back door to get my camera!  Fortunately, the hawk just sat on a huge limb and watched us.  Seriously though, I was also keeping an eye on my little dog, Lucy, during all this!  I wasn’t sure if the hawk was eyeing her as a snack or something!  Once I sat back down with my camera, Eddie slowly turned around and watched as I began snapping away at that hawk.  It’s as if he knew he was being photographed.  He seriously posed for me!  In one shot he raised one of his wings and it looked like a robe being raised in a dramatic Shakespeare scene.  I told Eddie it looked as if he was saying “To be or not to be…”

To be or not to be! This hawk was showing off for us!

Backyard hawk staring us down 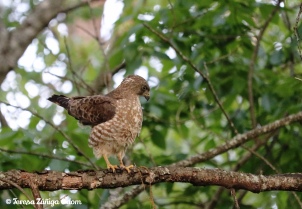 It’s November now and the bird feeder is full, which is unusual.  In the spring and summer we were filling it every other day!  I miss seeing the birds but I know there is a season for everything.  Oh, and we added a hummingbird feeder in late August and that was fun!  I was sitting in our gazebo tent on the deck one day and kept hearing this chirping sound.  I soon realized it was the hummingbirds!  Until that day I didn’t realize they made a sound!

I’ll miss seeing all these birds but come next spring, I’ll be ready with my camera at the kitchen table!