Nov 2014 – celebrating the anniversary of the night we met!

It was Veterans Day eve and I had UAB Chamber Choir rehearsal that night.  I remember all my friends from work were heading out to a “happy hour” and I was a little disappointed that I wasn’t going with them.  But the Chamber Choir was getting ready for a performance and I knew I couldn’t miss rehearsal so…

A friend of mine said she would go later if I felt like it.  So after rehearsal, I called her and we both got ready and headed to the happy hour.  It was close to 10 p.m. and I thought there wouldn’t be anyone there.  Turns out Mr. Right was there!  And the party was just getting started!

Our big group danced and sang along with the band for the rest of the night.  The band kept asking for requests and I kept asking them to play “Werewolves of London” by Warren Zevon to no avail.  (I still do this when I’m out and I’ve yet to have anyone play it for me!)  Eddie and I kept drifting toward one another when we were all dancing together and eventually we ended up dancing together.  We had both been noticing each other at work and he told me later he’d had a secret crush on me when he’d see me at the office.  I confessed the same to him. 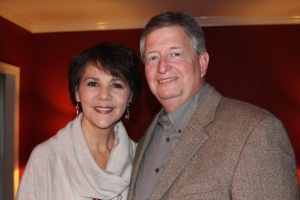 Veterans Day eve became our “first” anniversary – the anniversary of the night we met and we’ve been celebrating it every year since.  When the kids were little we’d have dinner at home and play up about the night we met.  As they got older, we started going out to celebrate and reminisce about meeting and when we dated.  It’s fun to keep those stories alive and even more interesting when new details emerge!

Card from our server at Firebirds two years ago as we celebrated our 33rd “first” anniversary.

The entire staff at Firebirds signed our card!

Our Firebirds server surprised us with this awesome dessert too!

Two years ago we went to Firebirds for dinner.  I don’t know if it was the way we were talking or what, but the server asked if we were celebrating something special.  We said, “yes, the anniversary of the night we met 33 years ago.”  She thought that was the coolest thing ever and by the end of the meal, she brought out a fabulous dessert on the house along with a card addressed “To the sweet couple!” When we opened it, the entire staff had signed the card!

Tonight we will continue the tradition of celebrating our “first” anniversary.  If there is a band wherever we go I’ll yell out “Werewolves of London” as a song request.  Meanwhile, I’m so thankful that I decided to go to that “happy hour” on that night 35 years ago.  I can’t imagine my life without this wonderful man in it!

Stories For and About Living Your Truth